When it comes to the Teen Choice Awards, the red carpet is pretty casual. Gowns and suits are not needed. But like any red carpet, confidence and style is a must.

To be honest, this year the only nominations I knew about were for PLL and Fifth Harmony. But of course the (blue) red carpet looks peaked my interest. [Photos courtesy of Zimbio]

First let’s start off with the actual teens that caught my eye. What is a Teen Choice Award show without their target audience. I mean, let’s be honest. Most of the actors and actresses we see in our favorite teen shows are way over their 20s. Very rarely will we see an actual teen play high school student. But that’s where these 3 come in to play.

Millie Bobby Brown is the breakout star of the Netflix hit show,  Stranger Things. She made her big red carpet debut last year during Emmy’s week. I remember saying that she is going to be a fashion icon of her generation, and that definitely still holds true. The 13-year-old Choice Breakout TV star nominee, chose to walk the blue carpet with a yellow Kenzo dress and some cute yellow and orange block heels. She paired the look with some round sunglasses that screamed she was chill AF.

Maddie Ziegler is best known for being on Dance Moms and the girl from the Sia music videos. The 14-year-old has grown before our eyes and has been the teens’ Choice Dancer for 2 years! Yes, she won again this year. On the red carpet, she went with a black two piece Zac Posen Resort outfit with some floral detail. There was no need for a clutch because she had pockets. Pockets are life. She rocked the red carpet with her BFF Millie Bobby Brown and it’s great seeing these young girls support eachother. She’s going to be a fashion icon as well!

Jade Chynoweth will soon be seen on the YouTube Red series Step Up: High Water. If you aren’t really aware of the dance community, she’s pretty popular and can be seen killing so much choreography. YouTube her. She’s fierce AF. I mean, did you not see her performance alongside co-star Kendra Oyesanya at the awards tonight? The 18-year-old opted for a white crop top and some navy striped palazzo pants.

Next comes the Freeform starlets. In my opinion, the PLL cast was pretty much the most stylish cast on TV. With Pretty Little Liars ending, I’ve been looking for some new fashion icons from the network. And think I’ve found them.

Niki Koss is fairly new to the young hollywood game. Famous in Love is her first TV series and she definitely stood out. If you’ve seen one particular photo shoot she’s done, she has this uncanny resemblance to Audrey Hepburn.  Her whole aura screams fashion icon in the making. She chose to go with a yellow, floral, off the shoulder mermaid style dress by Pretty Little Thing. Looking at the pictures, she definitely looked comfortable on the red carpet. And those eyebrows are always on point.

Katie Stevens definitely represented The Bold Type tonight. She oozed confidence. Obviously, she’s not a newcomer to the Teen Choice blue carpet because we’ve seen her rock some great dresses when she was Faking It on MTV. But tonight she went with the power pose in a green power pant suit by Styland. She boldly wore a low cut blazer opting to go bare underneath. Her slicked hair and black heels finished out the look.  Jane Sloan would be proud.

Let’s move on to the two experts at the red carpet who happen to be former Disney stars!

Zendaya IS a fashion icon of her generation. People are always looking forward to see what she wears on the red carpet and in real life. She has such a huge influence, she was nominated for six awards tonight, including Style Icon. Although she didn’t win the Style Icon award, she won the red carpet with her outfit. She wore a striped pajama like set by Ashish. She looked comfortable and casual and made the look work.

Vanessa Hudgens has been rocking the Teen Choice Red Carpet since 2005. At that time, we all knew her for her role as Gabriella in High School Musical. Fashion has evolved since then and so has her style. She looked sophisticated in a Reem Acra outfit as she accepted a special award. Vanessa was presented with the #SeeHer award for “pushing boundaries on changing stereotypes and embodying the fight for realistic female portrayals in media.” She has definitely used her voice to inspire a lot of young women to be themselves!

I’d like to acknowledge the PLL fam that represented tonight. Honestly, I’m pretty bummed that Pretty Little Liars lost Choice TV Drama. They gave us 7 great years. Oh well, they are still winners in my eyes. 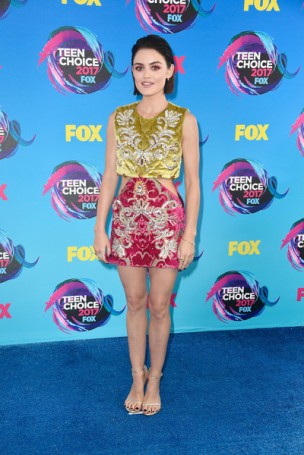 Lucy Hale took a break from filming her new show Life Sentence to attend tonight. She showed up in a red and gold Fausto Puglisi dress with some floral detail. As she pointed out when accepting the award for Choice TV Drama Actress, this years Teen Choice Awards was practically her last PLL event. I’m definitely going to miss seeing the PLL girls together, but I will be paying attention to what they’ll be wearing on future red carpets. And of course I’ll be supporting their future projects.

Janel Parrish had my favorite look of the night. She was a vision in white from head to toe. The Hamel dress included a ruched skirt and she showed off how toned her body is! Now while she looked like an angel, she went home with the Choice Villain award for her role as Mona Vanderwaal. I feel like some people underestimate her since she’s not part of the core 5, but she is definitely a force to be reckoned with. Also, her hair is flawless.

Finally, I want to shoutout to Fifth Harmony for winning their awards and slaying the red carpet with their outfits! I’m so used to seeing them coordinate their outfits, but each of them have their own personal style and showcased that tonight.

What were your favorite looks this year?