Last night was fashion’s biggest night out with the annual MET Gala! The exclusive, invite-only event brought out the biggest stars to raise money for New York’s Metropolitan Museum of Art’s Costume Institute.

Every year heads are turned with bold looks and this year, stars tried to keep to the theme, “Camp: Notes on Fashion”. To be honest, as I looked through all the MET Gala updates, I didn’t really understand what “camp” meant. I still don’t, but I can tell some people exceeded expectations, while others fell a bit short. Read till the end to see who were my favorite!

GEMMA CHAN stepped out in Tom Ford looking like the Queen that she is. She sparkled from head to toe in a custom sequined gown and cape combo. But the biggest thing that didn’t go unnoticed was the headdress inspired by the icon Elizabeth Taylor. 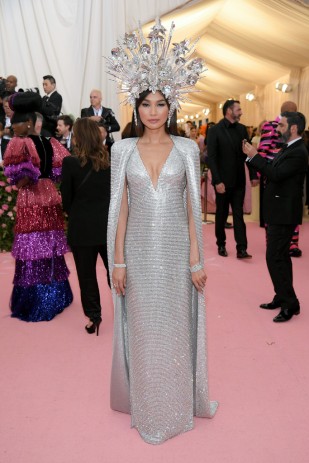 KENDALL JENNER joined the family in a Versace gown accompanied with Tiffany jewels. Out of the entire Kardashian-Jenner clan, she was my favorite of the night. She looked like she was channeling a phoenix with the fiery feathers and proved to be one of the most sought out models out there.

MUSIC TO MY EARS/EYES

DUA LIPA and that hair! I’m so used to seeing her with her shorter do, but campy can mean exaggerated and well, she pulled it off. She rocked such a colorful Versace gown and the detail of the top was stunning. The UK singer did quite a great job for her first time at the ball. 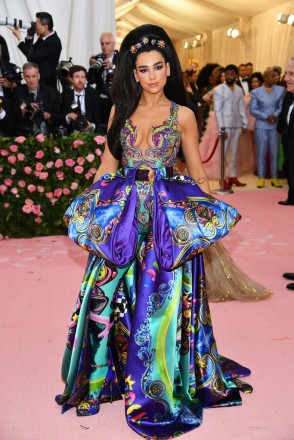 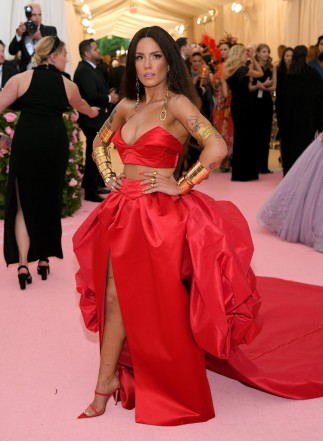 HALSEY was a lady in red in this Prabal Gurung dress. From the way she carried herself, I got some Wonder Woman vibes. The look was completed with gold armbands and jewelry. How epic would it have been if she met Gal Gadot?

KACEY MUSGRAVES looked like a real life Barbie and I am not complaining. She strutted the pink carpet in a hot pink Moschino ensemble, even carrying a pink hairdryer around as an accessory.

EMMA ROBERTS was another actress that decided to show up to the pink carpet in a pink gown. She wore a tiered, tulle Giambattista Valli Couture dress accompanied with a flower crown and Chanel #1 would be proud. 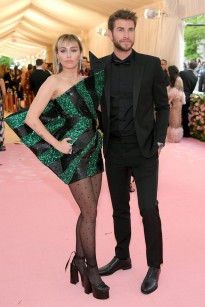 MILEY CYRUS & LIAM HEMSWORTH coordinated with matching Saint Laurent pieces. Miley opted for a black and emerald green dress, while her hubby complimented her in a black suit. It wasn’t as “campy” as I thought it would be, but when the two of them walk the red carpet together, you can’t help but feel the beautiful love.

SOPHIE TURNER & JOE JONAS made their debut as a married couple and they did it in style. They defined “matching couple’s outfit” in Louis Vuitton. I thought it was very “mod” with all the color and patterns. Is mod considered campy? All I know is that they looked great together.

NICK JONAS & PRIYANKA CHOPRA made their debut at last year’s MET and kept the tradition going. They rocked Dior together: Priyanka with her extravagant dress and hair and Nick with an all white ensemble. 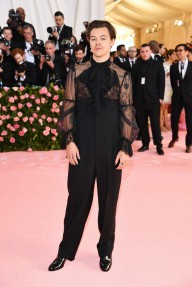 HARRY STYLES chose to wear Gucci for his debut at the MET Gala. He was tapped to co-host the event and made sure to show off his fashionable self. The black jumpsuit was sheer in all the right places. Harry topped off the look with one pearl earring.

HENRY GOLDING made his MET Gala debut last night, just like a few of his Crazy Rich Asians co-stars. He stepped out in a Versace suit, but it wasn’t your typical black and white number. He rocked a purple and blue ombré suit with a matching tie.

DARREN CRISS was definitely very “campy”. He seems to always push the boundaries and is very confident in his skin, which made this Balmain look work with matching eye make-up. The jacket was 13-lbs, so he probably got a little work-out in!

THE WINNERS AKA MY FAVORITE LOOKS

ZENDAYA graced the MET Gala red carpet looking like a Disney Princess. She channeled Cinderella in a custom Tommy Hilfiger gown, transforming on the pink carpet with a little magic from her stylist. She even left a glass slipper on the MET stairs and I am 100% here for Zenderella.

HAILEY BIEBER‘s  look was one of the first looks I saw that made me say, “wow”. I’m not sure this was “campy”, but I loved it anyway. She was pretty in pastel pink with a backless Alexander Wang gown. The gown was absolutely stunning, along with her hair and makeup, which gave her an overall classic look.  P.S. I’m mad at all of you making Degrassi/Manny Santos jokes.

Who were your favorites of the night? Did you miss anybody because I definitely missed Blake Lively!