New York Fashion Week isn’t the only happening event from this past week. The Toronto International Film Festival has also been bringing in the world’s biggest stars and my favorite one has been in attendance promoting her movie Her Smell.

Ashley Benson kicked off her TIFF 2018 trip at the The Hollywood Foreign Press Association And InStyle Party. Styled by  Tara Swennen, Ashley wore an Osman London piece from the Pre-Fall 2018 line. That night she also made it to the DIRECTV House Presented By AT&T and a Vanity Fair event celebrating the film This Changes Everything.| Photo Source: Michael Loccisano/Getty Images North America via Zimbio | 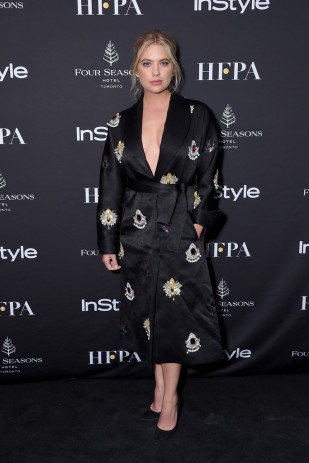 The next day she made it back over to the DIRECTV House styled in an Everlane top, and Brunello Cucinelli pinstripe pant suit. Paired with some Veronica Beard loafers, Ashley looked like a badass boss lady. More power suits please! | Photo Source: Charley Gallay/Getty Images North America via Zimbio |

Before heading home to New York, Ashley attended the Her Smell Premiere and the RBC Hosted Cocktail Party with her co-stars, including rumored girlfriend, Cara Delevigne. The former PLL star was red hot in a Dolce and Gabbana dress and some black Jimmy Choos. | Photo Source: Jemal Countess/Getty Images North America via Zimbio |

Her Smell is Ashley’s first project after the end of Pretty Little Liars and will be premiering in the US at the end of this month at the New York Film Festival. I can’t wait to see it!