The People’s Choice Awards is one of my favorite award shows because it’s catered to the fans. It covers everything from movies, television, music, and fashion. It might be a little different this year due to E!’s takeover, but one thing that remains the same is the celebrities slaying the red carpet.

The Riverdale star walked the red carpet in a white, strapless dress. The Etro dress featured some floral detail, but my favorite part about it is the yellow lining and little block of yellow folded over. Tonight, Camila was nominated for Female TV Star of 2018 for her role in Riverdale. |Photo Source: Zimbio|

She was definitely one of my faves of the night rocking a pinstripe suit by Tom Ford like a boss. She walked the red carpet and presented with such confidence. The young singer/actress just released her 3rd album, “Singular Act”, which you can stream on Spotify or purchase exclusively at Target! |Photo Source: Zimbio|

Before taking the stage to perform “Let You Love Me”, the British singer-songwriter wore a periwinkle blue Versace dress with beautiful gold accents and matching boots. She exuded elegance. It’s definitely a far cry from her Post Malone Halloween costume. She took some time off from music to pursue acting, but is getting back on the saddle with a new album coming out this month. |Photo Source: Zimbio|

Tonight, Victoria Beckham was presented with the Fashion Icon award and she truly deserved it. She wore a white power suit from her own collection and although it’s been a while since she’s been in the actual spotlight, she rocked it flawlessly. On another note, I loved the little ode to the Spice Girls! |Photo Source: Zimbio 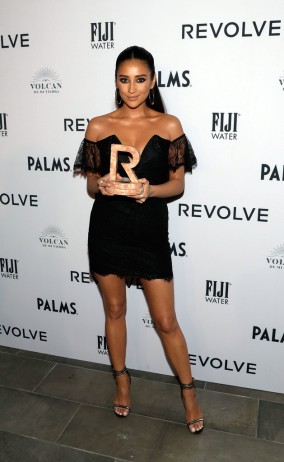 Shay Mitchell took some time off from her busy schedule and graced the red carpet in a maroon, halter style dress by Australian designer Toni Maticevski. The former Pretty Little Liars star has been busy since the iconic show has ended, starring in Lifetime’s You and soon to be seen on the big screen in The Possession of Hannah Grace. The other day, she even won YouTuber of the Year at the 2018 Revolve Awards! |Photo Source: Zimbio| 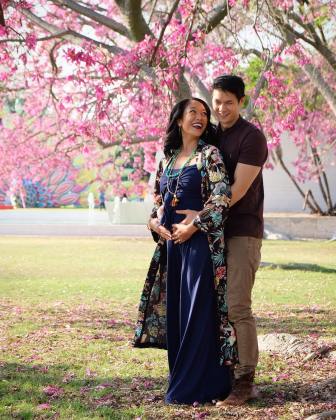 I adore Harry Shum Jr. and in my opinion he is one of the most fashionable men in the entertainment world. He wore a black, slim fit slacks and paired it with a double breasted black and grey blazer. His show Shadowhunters took home four awards, including his win for Male TV Star of 2018. Earlier today, him and his wife, Shelby Rabara, both announced that they’re expecting and the Gleek in me is so happy for the two! | Photo Source: Zimbio |Shelby Rabara IG |

Who were your faves of the night? Leave a comment and let me know!

| Next weekend is the So-Cal Museum Free For All, so here’s a throwback to LACMA |
| These jeans are about 3 sizes down from my normal size. It might be the style/cut of the jeans, but it still feels fucking good.|
| I’m on a ramen kick |
| 10 years have passed. Photos have gotten better and I’ve learned to look less awkward (although still awkward). But if there is one thing that hasn’t changed about me, it’s the fact that I still fangirl pretty hard. 😂 Swipe left to see what I obsessed over back in 2010 | Oh and music is still my life | @blackpinkofficial @gleeonfox
| The first day of the decade included a mini walk and writing in my calendar/planner. But mostly lounging around doing a whole lotta nothing. How about you? |
2019. As any previous year, 2019 had its ups and downs. But I feel that this past year really tested me, especially the 2nd half of this year (and this holiday season). I’ve broken down many times both by myself and in front of others, only to come back and smile the next day, pushing aside my emotions. I’m not great at expressing myself verbally. Most of the time I just smile not wanting to be a burden to anyone, especially because everyone is dealing with their own personal battles. I’m the type of person who bottles things up and then cries to anyone who is willing to listen. I guess that’s how I cope? But anyways, to those who have been on the receiving end of my break downs and tears, thank you. Thank you for reminding me that it’ll be okay...that it is okay to feel what i’m feeling. Thank you to everyone I’ve spent time with that gave me a sense of normalcy. Simply, thank you. I’m grateful for the memories made with family and friends. Going into 2020, I have to continue to be selfless and patient. It’s not going to be easy, but i’m going to be strong and I’m going to find a better way to balance the things in my life. I don’t know how I’m going to do it, but I have faith it’ll happen. I don’t know where I’m going with this post, but thanks for reading. Happy New Year to you and yours 💕

I love these two so much. Do we really have to wait until 2019?
My fave @jamiejchung killed it during #GoldenGlobe weekend 2018
Looks I Love: 2018 Golden Globes | Link in bio!
Fashion week recap: @ashleybenson is always my favorite 😍 | Link in bio . . #ashleybenson #style #fashion #ootd #ootn #newyork #nyfw #love #pll
Fashion week recap: @jamiejchung 😍 | Link in bio . . #jamiechung #style #fashion #ootd #ootn #newyork #nyfw #love
| Looks I love: 2017 Grammys | Link in bio. Ignore my layout, I know it needs a change 😂