It’s #FashionFriday and New York Fashion Week has officially come to an end for Fall 2017. This year fashion week kicked off on Thursday, September 7th and ended Wednesday night on September 13th. Cinq À Sept was one of the first shows and the week was full of other celebrations that tailored to Fashion Week, like Harper’s Bazaar “Icons” celebration.

While so many people flocked to New York to check out what will soon be trending in the fashion world during Spring/Summer 2018, I kept tabs on what my favorite celebrities were up to and what they were wearing.

Here’s a recap of a few of my faves! (Photos from Zimbio, unless stated otherwise)

I always look forward to Fashion Week because I know that Jamie Chung will be there! She’s made her way up the fashion totem pole and is almost always seen every year in the front row at the hottest shows.

She kicked off her NYFW journey at the Kate Spade Presentation, styled by her go to stylist Jeff K. Kim. Jamie wore a Kate Spade New York boho floral jacquard dress over black slacks. The dress comes with a detachable black bow at the collar, which she opted out of. But the look isn’t without a bow, as she decided to go for a black bow as a belt at the waist. The outfit was paired with appears to be a tusk colored Kate Spade “Cameron Street Jensen” tote bag.

Later that night, Jamie attended the Harper’s Bazaar “Icons” event. Styled by Jeff K. Kim with makeup done by Brian Dean, Jamie walked the red carpet with a Roberto Cavalli dress. After doing some research, this tiered, patterned dress looks like it may have been part of the Spring 2017 collection 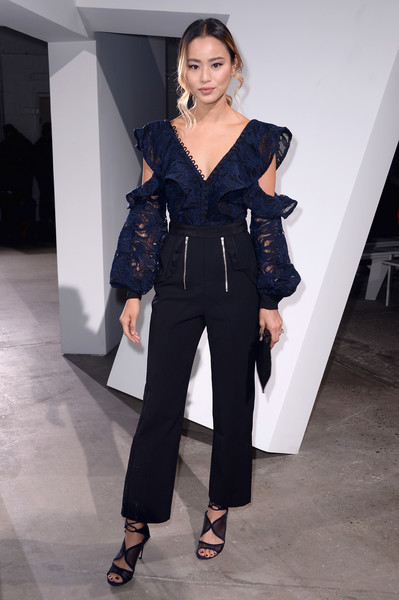 On September 9th, Jamie showed some love to Han Chong at the Self Portrait show while rocking their Camo Lace Frill Jumpsuit. I’m loving the navy laced top as it gives the illusion that it’s a two piece outfit.

The former Gotham star was last seen front row at the Jonathan Simkhai show alongside Sabrina Carpenter, Karen Gillan, and Shay Mitchell. She wore a black Jonathan Simkhai Dimensional Lurex Trumpet Skirt, which is part of Jonathan Simkhai’s Fall/Winter 2017 line, and paired it with a grey sweater.

Favorite Look: Jonathan Simkhai
Where can we see Jamie Chung next: She can be seen on Fox’s new show The Gifted which premieres on Oct. 2, 2017.
Social media: Twitter | Instagram | WhatTheChung

Ashley Benson has always been and will always be one of my favorite actresses. Over the past few years, we haven’t really seen Ashley attending Fall NYFW, but now that she’s a New York resident, it was definitely a bonus to see her this year. This year she turned to stylist Tara Swennen and had Chad Wood alongside for a fresh new hairstyle!

To start off her Fashion Week experience, she attended Refinery29’s ’29Rooms: Turn It Into Art’ event with a pair of black trousers by Dorothee Schumacher and a white (or baby blue) button down top from Brunello Cucinelli. A pair of black suspenders held the outfit together. While roaming around, she was also spotted with her signature leather jacket, which always makes her look so badass.

The next day, Ashley sat front row at the Jeremy Scott show with a different look compared to the night before. She opted for a Jeremy Scott hoodie from his Fall 2017 Ready-To-Wear collection, donning the image of Jesus. Who needs pants when you have these amazing Pollice Lee “Lily” boots?!

The other half of ButtahBenzo also happened to attend W Magazine’s “It Girl” luncheon. I wasn’t able to find a full size photo of her outfit, but it looks like she may have been rocking the Fleur Du Mal Double Breasted Short Blazer Dress. Also, Chad Wood did a great job with her hair.

Favorite Look: Refinery29’s ’29Rooms: Turn It Into Art’ event
Where can we see Ashley Benson next: Ashley’s taking a little break, as she should, considering Pretty Little Liars lasted a while.
Social Media: Twitter | Instagram | XOBENZO

Shay was slaying mostly every day during NYFW. She had so many looks to keep track of, but she looked like she had a lot of fun.

She was at one of the first shows of the week, the Cinq A Sept presentation. She was styled in black from head to toe by Marie-Lou Bartoli. She wore a black, off the shoulder Cinq A Sept dress with some Saint Laurent heels and a black Hermes bag.

The same night, she attended Refinery29’s ’29Rooms: Turn It Into Art’ event. She was styled by Mimi Cutrell in a Fausto Puglisi oversized shirt, no pants needed! The slicked back, high ponytail was styled by Laura Polko and makeup was done by Shay’s go to, Patrick Ta (assisted by Jen Tioseco).

The next day, the Pretty Little Liars star was spotted front row at the Cushnie Et Ochs show. I wasn’t able to find the exact stylist Shay worked with, but they opted for a Cushnie Et Ochs white jumpsuit very similar to the “Valerie” jumpsuit seen in the Fall 2017 collection.

She then made her way to Harper’s Bazaar “Icons” event with an opposite colored look styled by Marie-Lou Bartoli. She wore a vintage (Pre-Fall 2013) Versace gown with a hint of gold. She had her make up done for the night by Ariel Tejada and had some sultry, smokey eyes.

Just like Jamie Chung, Shay was seen front row at the  Jonathan Simkhai show. Styled by Marie-Lou Bartoli yet again, I had some Ariana Grande vibes from this look. She was seen rocking a Jonathan Simkhai white fur sweater from the Fall 2017 collection and a lace bodysuit from Pre-Fall 2017 collection under a pair of jeans. The combat boots and Shay’s bun done by Andrew Fitzsimons, completed the whole look.

Two days later, Shay was seen front row at the Anna Sui presentation. She looked like she stepped out of the 1970’s! She wore a gold two piece outfit (foiled diamonds wrap top & foiled diamond pants) from the Fall 2017 collection by Anna Sui. Completing the 70s look, Andrew Fitzsimons gave Shay some “big hair” with some curly locks.

Shay ended her NYFW stint at the Naeem Khan presentation on September 12. It was definitely a contrast from her look at the Anna Sui show. She wore a Caviar Beaded Dress With Long Sleeves from the Fall 2017 collection of Naeem Khan. Instead of pairing it with some heels, she opted with some Louis Vuitton boots. The slick long hair was also perfect!

Vanessa took a little time off of being a judge on So You Think You Can Dance? and attended a few events at NYFW. I’ve said this before and I’ll say it again: Vanessa always rocks whatever she wears. She exudes confidence and that’s what I love about her.

Like Shay Mitchell and Jamie Chung, Vanessa was seen at the Harper’s Bazaar “Icons” event. She was joined by long time beau, Austin Butler, and they looked amazing together. She wore a black gown by Jeremy Scott with some butterfly prints similar to what can be seen in his Fall 2017 Collection. 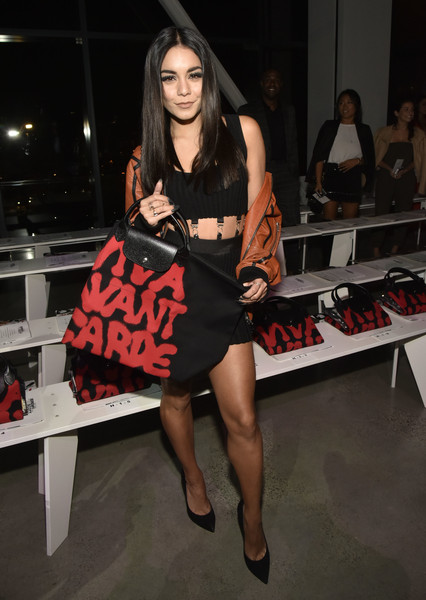 A few days later she was sitting front row at the Jeremy Scott presentation alongside Spring Breakers co-star Ashley Benson and bf Austin Butler. She wore a black cut out dress and an orange colored bomber jacket, which I believe is by Jeremy Scott, but I’m unable to find it! If anyone knows where this jacket is from, please let me know. Chad Wood also hooked her up with some gorgeous hair extensions.

And there you have it! My favorite people and their OOTDs during New York Fashion Week. What were your favorite looks?

If I’m missing anything or if I listed anything incorrectly, please feel free to leave a comment and let me know!