Due to my living situation, I can’t really cook a lot.  With certain limitations and me [and my mom] being shy to go out in the kitchen, we eat out a lot.

I’m pretty sure I’ve gained the weight I lost last year, from eating fast food and going to restaurants almost every day. It’s gotten to the point where I got sick of these food places I frequented. Some days I lose my appetite.

But we’ve found a way to cook a little more without feeling the guilt or pressure from our landlord. I’m pretty excited because I’m going to get the chance to eat a little better and cook what I want to eat.

I bought some ingredients with the intent to make mushroom chicken, but I forgot to get oyster sauce. Today, I ran to the closest store and went straight to the Asian section, but alas, they had run out. So I had to use what was available to me.

A few of my favorite vegetables include squash, so naturally I bought zucchini, Mexican squash, and kabocha. I think I would never get tired of squash, kabocha especially. The kabocha was used yesterday to make Ginataang Kalabasa (Squash in coconut milk), which I must say, was pretty amazing. So today, I wanted to make another squash dish. Because I didn’t have oyster sauce, I opted for some sort of soup.

I’m not great with measurements, but these were the ingredients I used:

As far as prep, there isn’t much to cooking vegetables. At least I don’t think so. Make sure you wash everything and get that excess dirt off. Nobody wants a worm crawling around in their soup, although I hear it’s extra protein. Hehe. I try to be funny.

After washing, time to slice! I sliced the zuchinni and mexican squach about 1-inch thick and cut them in halves. The mushrooms came sliced and that’s how I like it. Mushrooms are always so awkward to cut.

I started with boiling water and adding the squash first. I wanted to make sure they were cooked through and soft. Before adding the mushrooms, bok choy, and pre-cooked chicken, I added the can of chicken broth and brought that to a boil.

For taste, I added a few sprinkles of garlic salt. I absolutely love garlic salt with parsley. I season everything with it. I thank whoever decided that was a good combination. Now, because I didn’t have oyster sauce, I used stir fry sauce. It’s not the same, but it gave it a little taste and added some thickness to this so-called soup.

I want to learn how to make traditional Filipino dishes, but I love experimenting with different ingredients when cooking. I mean, what’s better than mixing your favorite things together? It’s always a plus if the dish ends up tasting good.

My mom says she liked it, but she’s a bit biased. 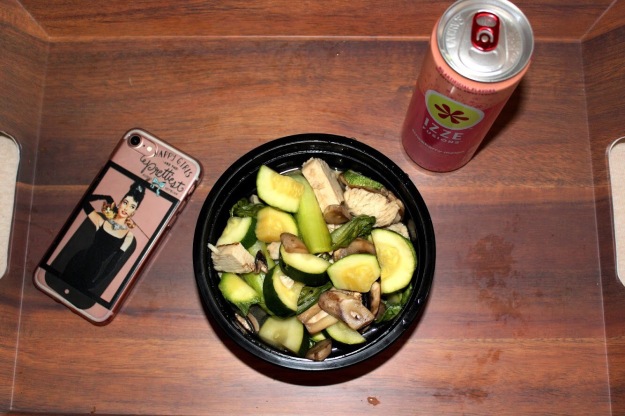